Cyber crimes by so called travel agencies are on the rise. People travelling cross boarders often fall prey to these scams ending up losing their money and holiday pleasures, as mostly they learn that they have been duped only once they reach the destination.

Recently tourists from Paris planned a trip to Dublin and searched the Google looking for suitable travel agents. But it turned out that the individual Florian Coulan was robbed of more than €1,400 through an elaborate scam.

Coulan had planned a trip with eight friends on St. Patrick’s Day so searched for a good place to stay through Google but high prices and low availability for accommodating three people and couple at a reasonable price seemed difficult to get at the time they wished to travel. But finally he managed to get hold of a company http://www.360travelonline.com, offering holiday rentals through Europe. They could offer him accommodation in Dublin they assured. 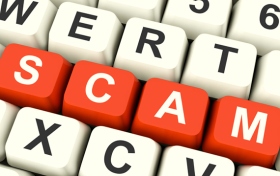 ity centre with an amazing price of €180 a night. It was a steal and an excellent place to spend holidays. He contacted the company through an online booking form and then inquired availability. He got an immediate response sig
ned by the customer service representative Marcus Westerlind. He was informed that the property he had chosen was available and ready to book at 180 Euro/night. They asked for a total booking value via bank transfer. Towels and bed linen provided, housekeeping was included in the price.

A few more emails were exchanged where Coulan was asked for personal identification details. He was delayed by two days but when he was in touch with the agency,  there was a note of urgency suggesting that there may be chances of the property slipping away. He immediately transferred the payment from his French bank account and within a day it had hit Westerlind’s Italian bank account.

Just five days before the St Patrick’s Day Coulan along with his friends went straight to the Georgian townhouse from the airport. Once they reached they found that it was a normal house belonging to an individual who was quite surprised to receive so many guests whom he hadn’t invited.

Coulan tried calling the 360travelonline contact at the landline and mobile numbers listed on the site but the phone did not work. Seeing that the group was thrown in such misery the house owner invited them and asked them to stay overnight and get their phones charged.

The carefully executed scam on tourists is creating distrust on online booking. The building from where the company claimed to operate too was also demolished eight years ago. The landline phones went to answering services and anyone choosing to hold the phone for more than 90 seconds was automatically disconnected. Dormant accounts are easily available on the black market and once the money is transferred into them, it can be wired anywhere in the world after which the trail effectively runs cold. These kinds of cyber crimes are increasing and one wonders how innocent travellers can check the authenticity of these sites.